If you own a cat, you’ll understand perfectly what I mean when I say that cats – though sometimes wonderful companions – can be the most stubborn animals on earth.  Although we’re settling into the new apartment in Boston fairly well, Perry seems to be having some issues adjusting.

Here’s why: on Saturday, while either in or near his litter box in the bathroom, the shower curtain and rod fell.  After that, he absolutely refused to use his litter box.  We found kitty poo in the dining room (twice), kitty poo in the guest room (twice), and never found any evidence – visual or smell – of kitty pee anywhere until he peed on the side of a box on Tuesday night.

I don’t need to tell you how troubling that is.

But kitty waste all over the house simply won’t do.  Upon researching the issue, I discovered this article from the ASPCA.  Since he’s been to the vet twice in the past month and had an antibiotic shot two weeks ago, it seems unlikely that it’s a medical issue.  Stands to reason that it’s stress, related to the move and the shower curtain scaring the poop right back into him, so I opted for the boot camp.

Here’s the thing… Perry is stubborn.  I moved his litter box to the other side of the bathroom and, though it seemed completely cruel, he spent a full 24 hours in the bathroom.  I checked on him regularly, played with him, petted him, and about 12 hours into it, he’d pooped in the box.

But he held his urine for twenty-four hours.  There was nothing indicating he’d peed in the litter box, the sink, the tub, or even the toilet (though I’d have loved him for that feat).  That obviously isn’t healthy and I decided the remedial litter box training simply wasn’t for him.  There’s now a litter box in the guest room, although I’ve no idea how we’ll handle this when someone visits.

Otherwise, he seems to be doing okay and is rather enjoying being able to venture out onto the catwalk: 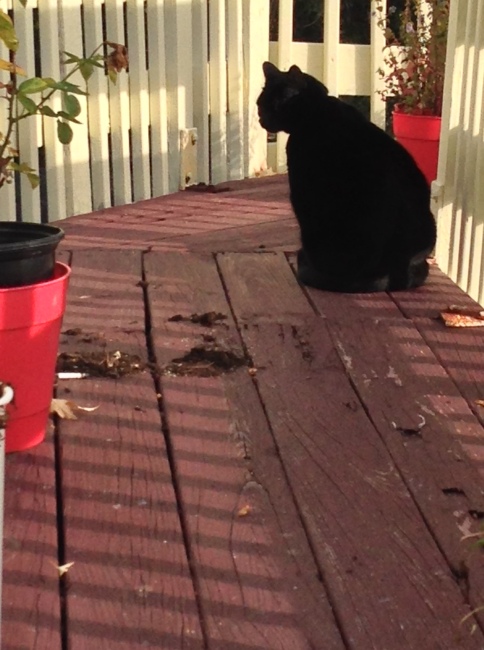 That said, I’m bored beyond belief (but obviously not bored beyond words).  I’m close to resuming work, but am waiting on a revision to my work contract.  Until we buy the rest of the furniture we need, I’m at a stopping point with unpacking.  The end result will be amazingly cute, but right now I’m tired of rearranging boxes.

So, while digging through my craft items, I realized that I have four skeins of this horrible green yarn.  I’ve no idea why I have so much green yarn, nor where it came from, nor what I might have ever used it for.  Since there’s no point wasting it, I put it to use by making a cat bed.

I know, right?  I’m turning into an old cat lady! 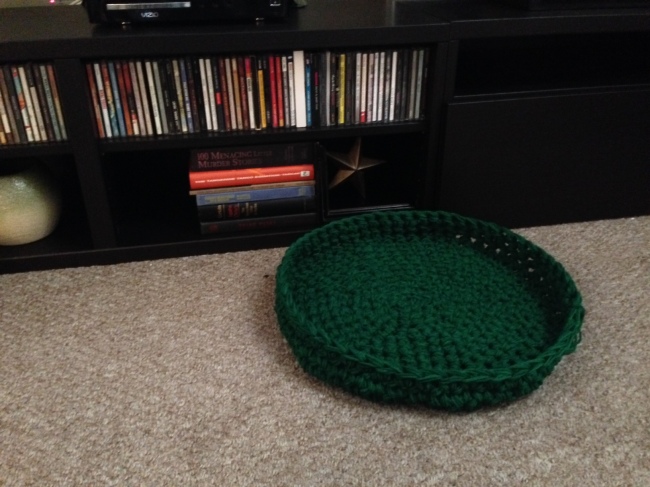 The only measure of success with this ugly green pet bed will be whether His Majesty actually deigns to curl up in it to sleep or not.

I’m sure he’ll hate it and I’ll wind up selling it on eBay or something.

But it gave me a break from working on the baby blanket and occupied a few hours of time.  It’s amazing how quickly things work up when you’re using four strands of yarn at once.

So now, back to watching Bones on TNT.  Until next time….

See my About Me page. :) View all posts by Tommy Hudnall

2 thoughts on “The trouble with settling in”